home | training blog | Week one Tour de France – the SMS “How do they do that?” guide

Week one Tour de France – the SMS “How do they do that?” guide

it was the best first week of the tour de france in years.

Week one of the Tour de France is up and what a week it was. Usually the beginning of the Tour is spent pottering around northern France for ten days and is very boring for the spectators and very dangerous for the cyclists. I’d usually get in after training myself, begin to watch it and fall asleep, waking up to some tennis or something on the TV. So here’s so commentary on the race and some answers to some questions that people asked me.

The first thing that came to my mind when I say the Corsica stages was that they were hilly and windy and very difficult to control. The island itself is incredibly beautiful, it reminded me of the algarve. Right on stage one there was issues with the stage finish being moved at the last minute and the Orica/Greenedge team bus getting stuck under the finish line gantry. This type of thing is not excusable at the blue riband event of the sport. There was a crash, Tony Martin clipped wheels with someone and a lot of guys came down hard. 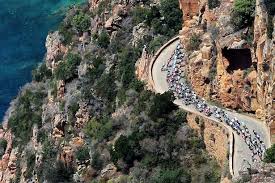 Corsica: a beautiful place and the best start to the tour in years

How do they? Ride in a peloton without crashing (more often)

When riding in a peloton, the cyclists avoid pot holes and other danger by looking (subconsciously) at the specific movements by other riders in peloton. For example a a rider shifting direction, changing his position on the bike (preparing to change direction), an up-down motion (passing a hole, uneven surface)… etc. With a lot of practice you can read where the dangers are without seeing them directly yourself. On important thing is not focusing on the rider or rider in front, but looking way ahead up the road and reading the race. Your subconscious brain will take care of dangers right around you.

The Tour is a particularly ‘nervous’ race, it’s not normal to have so many crashes in a race…
http://www.youtube.com/watch?v=-Xw095zLP6U#at=13
there were lots of crashes in this first week.

After these three days on Corsica, transfer to the mainland…

How do they? Do these crazy transfers mid race.

The riders will go by plane, the rest of the team go on a boat. ASO chartered planes and boats with this purpose in mind… Still it’s a crazy business moving all the teams, riders and race infrastctrure anywhere, yet alone of an island!

The last few races have been sprint finishes, but intresting finishes with a few climbs on route to complicate things for the sprinter teams. We’ve seen no one sprinter dominate, with Kittel, Greipel, Cavendish, Sagan and

How do they? Know how fast to go to reel in the break

There’s a little rule of thumb for this, although in this Tour de France it hasn’t stood up: You can’t give more than a minute for every ten kilometres to the finish to the break, or else it will be very hard to reel it in. So if there are 30km left in the race, the breakaway shouldn’t have more than a 3 minute lead, or it will be very hard to catch.

This Tour de France breakaways have been reeled in with 4:30 at 30km… Maybe when we get into even hillier terrain the likes of Mark Cavendish’s OmegaPharma/Quickstep will struggle more against these breakaways.

This weekend we finally saw the rider hit the high mountain: the Pyrenees to be precise. I was sad to see only two stages in the Pyrenees, before a transfer to boring old Nantes. But what a great two days racing!

I didn’t get to see the whole of Stage 8, as I was training, but I saw the finale and the results. I wasn’t only surprised by Froome and Porte demolishing the field, but also Team Belkin (former Rabobank) putting two guys right up there (Molema and Tendam). I was also surprised by Contador being made look like a school boy… A lot of surprises.

Stage 9 was again full of surprises. I never expected the peloton to e decimated so early in the race. On the first climb in fact, with Valverde attacking. Movistar put in an absolutely sublime performance to distance Porte in the GC and isolate Froome. Will we see more of these attacks from far out have such a devastating effect on team Sky?

How do they do that? Race for nine consecutive days?

I’ve only done a few races where we race for eight consecutive days (never done nine), the Volta a Portugal, Tour of Britain and Tour of Bulgaria. Within eight days is enough to get really tired, you’re heart rate can be 10-20 beats lower than usual while racing and you can’t do anything apart from race, eat and sleep.

How do they do that? -Rest on a rest day?

I’ve written about rest days before, find out at least, what I do on a race day here. Of course everyone is different.. I like to get away from the race a bit.

How do they do that? How does Chris Froome ride so fast up a mountain?

People make a lot of insinuation about doping, but let me put perspective on this. Sky has a budget that they can do what they want. Some say £35 000 000, some say it’s a blank cheque. I don’t know. The team has more in common with an F1 team than a cycling team in its approach to racing. Sport science can do a lot, but you need to get the right people, give them the right equipment and this all costs money… a lot of money and is beyond the reach of most athletes. Is it unreasonable to assume they are gaining an advantage within the rules?